If you go to the British Library online catalogue, search for music scores published in each year from 1650 to 1920, and plot the number of ‘hits’ by year, the result looks like this. 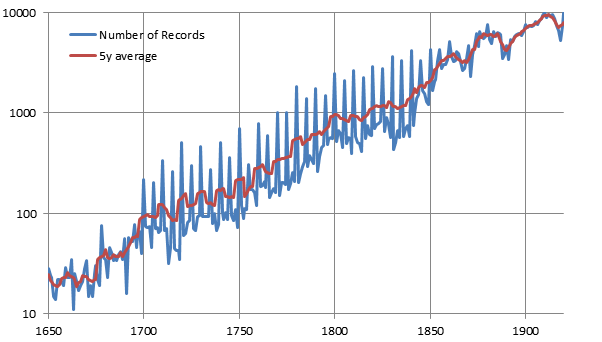 Along the bottom of the chart are years from 1650 to 1920, and up the side is the number of scores in the British Library attributed to each year. Note the logarithmic scale, where each gridline represents a factor of 10. The blue line is the actual number of scores attributed to each year, and the red line is a five-year moving average, i.e. the average of each year and the two years either side of it.

There are two interesting things about this chart. The first is that the overall upward trend in the red line is remarkably straight. Over the period, the number of scores increased steadily by roughly a factor of ten every 100 years.

The other interesting thing is that between 1700 and 1850 the blue line is very spiky, with regular spikes every five years. That is because a lot of printed music publication dates are unknown, but have been estimated to the nearest round number – i.e. a year ending in ‘0’ or ‘5’. Judging by the movements in the red line, there are more ending in ‘0’ than ‘5’, as you would expect.

If you subtract the red line from the blue line you end up with the following chart. 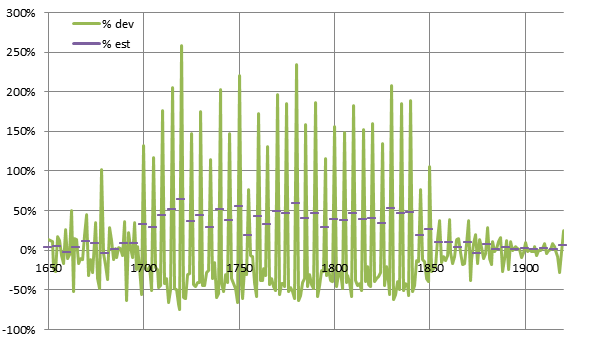 The green line here represents the percentage by which the number of scores attributed to each date is above or below the five-year average. It is striking that the spikes are largest between 1700 and 1850. The small number of older scores are perhaps better studied, and more accurate date attributions are possible. After 1850, presumably it was more common for publishers to print a date on the score. The pattern is perhaps also related to the large backlogs that accumulated in the early days of the British Library’s music department, so some newly published scores may not have been logged when they arrived.1

It is possible to estimate, as indicated by the little blue dashes, the proportion of total works from each five-year period that appear to have an approximate date. In the period from 1700 to 1850 these average out at about 40%. So between these dates, there is a 40% chance that we only have an approximate idea of a score’s actual publication date.

Of course, this is only one source. Other libraries might have different procedures in place for assigning publication dates, so we probably cannot generalise without some further investigation. In many cases, it might be possible to work out more accurate dates for individual musical scores from other sources, but we cannot assume that a library catalogue reflects the best current scholarly information on every item.

This is an example of where a bit of simple statistical analysis can give an interesting insight into a familiar dataset.

Cite this article as: Gustar, A.J. 'Publication dates of music in the British Library' in Statistics in Historical Musicology, 25th September 2017, https://www.musichistorystats.com/publication-dates-of-music-in-the-british-library/.